Version 8.3.7 of the Sendio software gives admins the ability to configure LDAPS in Directory configuration. Previously, assistance from Sendio Support was required in order to enable LDAPS on a Sendio instance.

Microsoft has recently advised customers to enable LDAP channel binding and LDAP signing to prevent man-in-the-middle attacks. Making these changes to Active Directory requires all LDAP clients to use LDAPS.

Although this change to force LDAPS is not being forced we do still recommend updating your Sendio configuration to connect to your Active Directory via LDAPS.

Preparation steps:
1. Enable LDAPS in the Active Directory Domain Controller your Sendio synchronizes to.
2. Create a firewall rule to allow access to either port 636 or port 3269 on your Domain Controller.

1. Login to the Web UI as an Admin
2. In the Directories tab select the Directory you would like to enable with LDAPS
3. Select “Use ldaps” 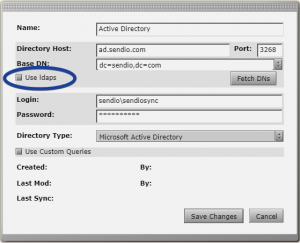 After selecting the “Use ldaps” checkbox, a “Test SSL” button will appear and will allow validation of your LDAPS connection to your Active Directory. 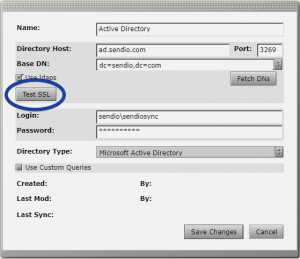 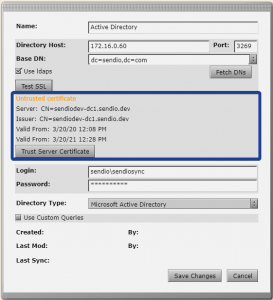